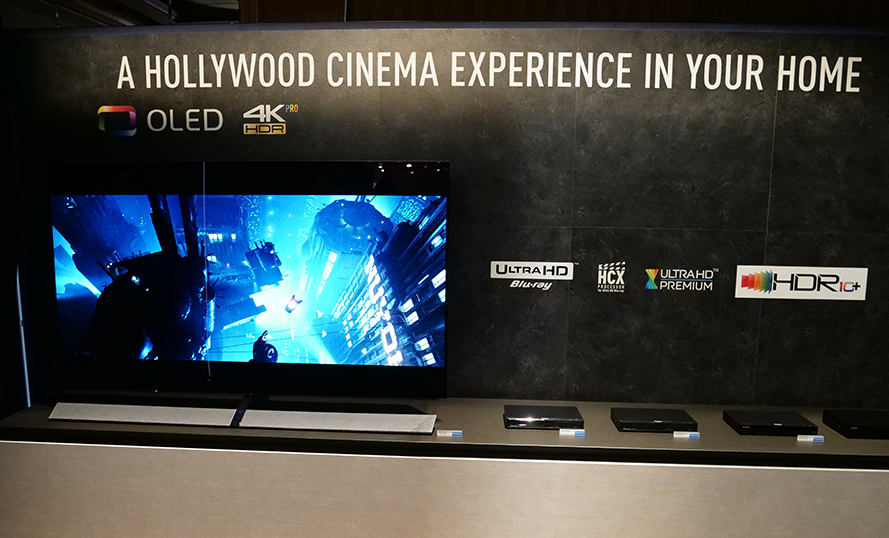 These new models from Panasonic will combine Hollywood-tuned processors and HDR10+ technology – the first OLED screens available in 2018 to do so. In fact Hollywood giant Deluxe, that colour grade many blockbuster movies, high end television episodes and adverts have approved using the 2017 Panasonic EZ1000 OLED series as a client reference master monitor. There has never been a consumer TV used a master monitor and now not only are the TV’s being tuned in Hollywood but are being used in Hollywood to make sure they deliver the colour as the director and colourist intended.

HDR10+ is an open, dynamic metadata platform created by 20th Century Fox, Samsung and Panasonic. This means that any company can use this platform in their products or movies without paying royalty fees. HDR10+ tells the TV the black levels and peak brightness by scene in the movie which means that every scene can be individually colour optimized for a particular TV. Versus, previous technology, HDR10, that has static metadata and applies the same data across the entire movie. This means HDR10+ , allows the viewer to see bright colours and crystal clear details across every scene. The good news is that more TV models are also expected to utilize HDR10+, in 2018 and more movie studios such as Warner Bros have said they will support the format as well as streaming services .

Panasonic’s OLED TV’s with the Absolute Black Filter which absorbs ambient light in order to eliminate reflections, this is especially beneficial for Australian living rooms which are bright. It means it produces images with the purest of black levels, which make darker scenes in movies crisper and make colours pop.

The FZ1000 features a Technics Tuned Soundbar. The new 8 speaker design gives 40% more volume versus the current model and by using the very best audio technology developed by Technics means you now get the best sound quality to go with the best image quality.

The FZ1000 and FZ950 series of OLED’s will also satisfy the demands of the most proficient gamers and have evolved to offer an enthralling 4K HDR gaming experience, thanks to the quickest-ever response times. The screens’ dedicated Game mode uses exceptionally fast image processing to deliver crisp, finely detailed images, even with fast-moving 4K and HDR games that require quick reaction times.

Two new Ultra HD Blu-ray Players have also been announced – the DP-UB820 and DP-UB420 – these players also support high quality HDR10+ technology, and the DP-UB820 also supports Dolby Vision. Dolby Vision is similar to HDR10+ and provides dynamic metadata to each scene but is a closed platform. This means that Dolby will collect royalty fees from users and TV’s and players will need to tested and certified by Dolby. Dolby Vision uses 12 bit video depth vs HDR10+ which uses 10 bit but there are no panels capable of showing the benefits of 12Bit yet These new Blu-ray players are designed to get the absolute best out of your Blu-ray collection – see your favourite movies in the true detail they were meant to be seen in.

Keep your eye on your inbox and our social media channels for announcements of when these new Panasonic models are available in Australia.